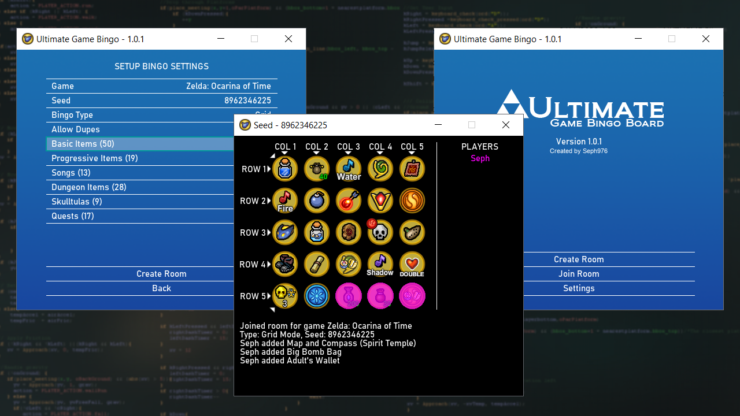 This is the continuation of my old Ocarina of Time bingo board that i made in 2019, i originally made it for a couple of friends of mine that played a lot of OOT randomizer races and i wanted to make a minimalistic board with lots of customization that would also look good on a livestream, and in the end i feel like it turned out pretty good, the problem however was updating it, because of the way i had made it handle randomized items it was very hard to add in support for other games, something that i decided later on would be a cool idea, the result is this, a brand new bingo board that can support multiple games, all with their own options and items, an online lockout mode and the ability to join as a spectator for keeping track of eachothers boards in race scenarios.

This new version only supports two games at the moment, Zelda: Ocarina of Time and Chrono Trigger, however i plan on adding support for more games in the future, including Zelda: A Link to the Past and Mario 64, so keep an eye out for updates.

Ultimate Bingo Board has most of the options from my old OOT board including support for both grid and hex type bingo boards and now also has the option to allow duplicate items on the board for easier or faster runs.

IMPORTANT: You may get a false positive from your antivirus when you run this, the reason for this is an extension i use made by YellowAfterlife to make sure moving the window around doesnt mess up your online connection, both the extension and the bingo board itself is fully open source so if you feel unsafe you can look at the code and build it yourself, if not, you should add an exception for both the exe files in your anvitirus.